If you’ve not seen our fight with Red Devil and you don’t want to be spoiled you should stop reading before the Post-Fight Analysis section.

With Red Devil as our opponent we had two weapon systems we thought would be well suited to the match, either our lifter or the vertical disk module. In the case of the lifter we had performance concerns due to the friction losses in the geartrain, so we opted to focus on preparing the disk. The two major tasks ahead of us were replacing some structural parts from the drive pod that Cobalt damaged and fine tuning the feeder wedge for the vertical disk. One odd quirk of our drive pod mounting is that the shock mounts allow the entire center pod to lean toward the center of gravity, which meant that the feeder wedge functioned like a hinged wedge while being very securely attached to the chassis. By slowly grinding away at the wedge we were able to tune the portion of the weight dragging on the ground, letting us keep a ground scraping wedge while keeping a high percentage of the weight of the bot on the wheels.

As usual, we waited until it was time to head over to the arena to reveal which weapon we were going with, though  I doubt which weapon we used would have had much influence on the configuration Red Devil went with. 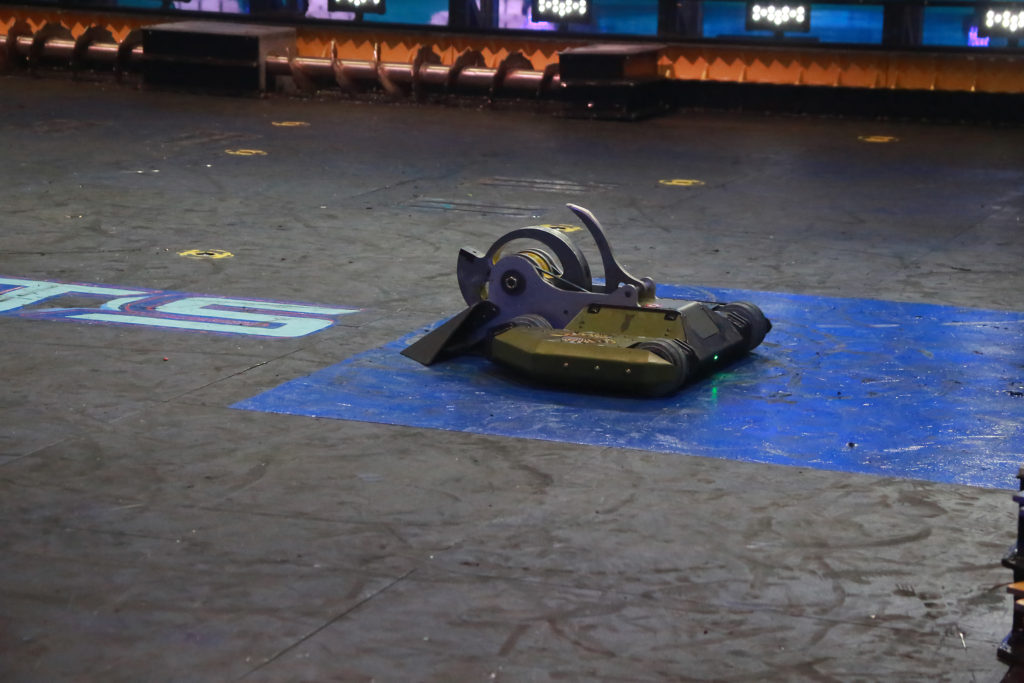 We watched the fight between Red Devil and Witch Doctor and knew that we wanted to minimize the chances of the same happening to us. We were less at risk due to the battery positioning, but anything can happen in the box. This meant our first goal was to reduce Red Devils mobility, so we’d be going after the tracks. If battering the tracks wasn’t enough, the next target would be the tube at the back that links the three major sections of Red Devil together.

That was not quite how we wanted things to go. We did manage to get the win and prove that with the existing judging criteria it is possible to win if your weapon fails early, but it’s certainly not easy.

So, what happened? An early design decision turned out to be a poor one. We’d opted for battery connectors where the wires were soldered into place, and due to the power pulled by the weapon one of the solder joints reflowed and the wire detached due to the on hit Red Devils track pod. Once that happened we had to make the best of the situation and use the wedge and now non-spinning disk as a battering ram. We run two parallel sets of batteries in Bombshells drive system and at some point during the fight one of those also detached. This meant we were trying to pull ~600 amps from a single 8s 5ah battery pack for an unknown duration of the fight, and that pack finally had a connection reflow right as the clock ran out, which narrowly avoided us being counted out. Those final two packs were no longer safe to use leaving us with a bit less than a full set of spare batteries and a lot of connectors to rework.

We didn’t have nearly enough connectors to swap to a new type before the next fight so we set to resoldering all of the connections and stress relieving all of the joints to reduce the chances of a wire detaching in our next fight.