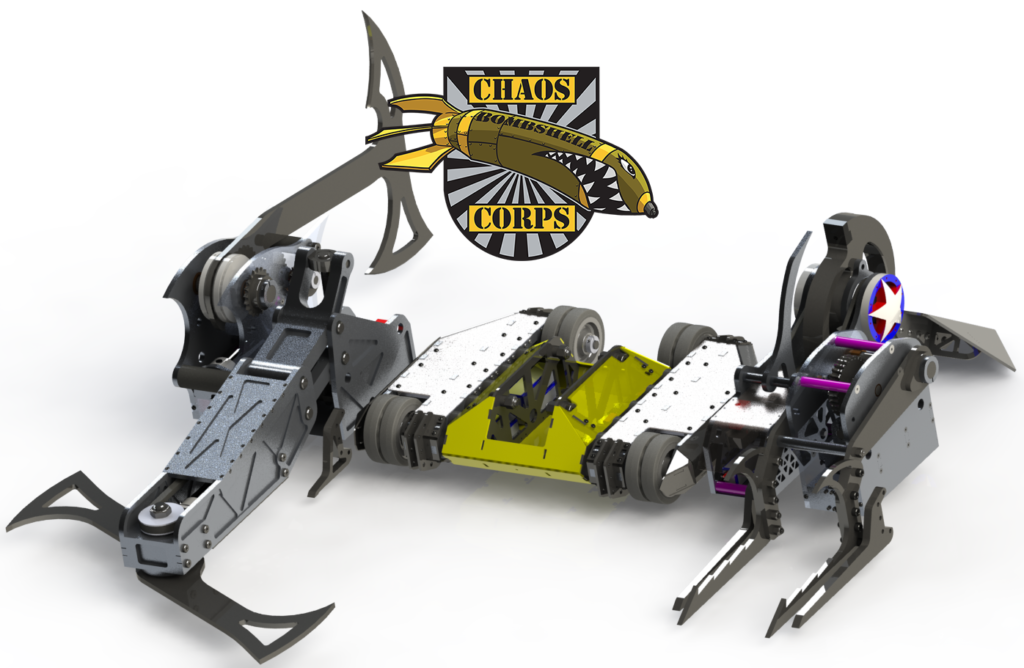 We decided quite early on to release the full model of Bombshell once the season had finished airing.

The full CAD model can be downloaded at:
http://www.chaoscorps.org/blog/wp-content/uploads/other/BombshellV1CAD.zip

A few notes on each major system

We were happy with the drive system performance, however the heavy gear modification required to stay within weight combined with the modifications needed for the outer plate (the CAD model of the A28-150 we had was 0.06″ shorter than the real motors so we had to pocket the rear plate so everything would fit together properly) and the slot-on end caps (which warped a bit during welding) made assembly of the drive pods a bit of a pain. We’re working on an updated design for Bombshell v2 that will address the issues found during the Bombshell v1 build.

Overall this pod worked quite well, though based on the damage received we can save some weight in this portion of the bot. We’ll also be looking at tweaking some of the wire paths to minimize the chances of flames reaching our electronics section again.

We were seeing enough losses in the worm gear stage that we suspect it was robbing the axe of a decent amount of power. We’re looking at a new geartrain setup that should result in a significant power boost.

We were quite happy with this weapon, our main focus for future upgrades will be on fine tuning the weight balance, making a more robust leadscrew mechanism (we had the gearbox on the DeWut pop out of gear due to shock getting through the system) and having a few bars cut for specific purposes.

The frictional losses from the worm stage kept us from using this weapon during season 2. We’ll be doing some major powertrain upgrades for Bombshell v2 to get rid of the friction losses and up the overall power.

Performance of this pod was good enough that we don’t have that much that needs to be changed. We are looking at moving to single piece disks and having a few disk types that are suited to particular opposing weapons. Beyond that, there will be a bit of fine tuning and general cleanup of the things that were rushed during the final stages of the build.