What a fight. For those that haven’t seen it yet, I’d suggest coming back to this post later as I’ll be talking about the results near the end of this post. Before that though I’m now able to discuss the activities leading up to our match with Complete Control and the approach we took to the fight.

We found out about our qualifying round match Sunday night, and with the fight not being scheduled until Tuesday at the earliest we had a lot of time to prepare. The thing is, so did Complete Control, which happened to be our pit neighbor. The Complete Control team was curious to know which weapon we were going to select for our fight, but we couldn’t just tell them. We spent most of Monday swapping weapons, testing, fine tuning, and swapping weapons again while we watched them work on counters for each new weapon we’d put in the bot.

Things continued like this for the better part of the day and around dinner time one member of the Chaos Corps went out on a small shopping trip. When they returned the supplies were hastily staged in our bots shipping crate and work continued. A bit later in the evening Julie made her way to the crate and wrapped the cardboard box you saw us bring into the box. Once the Complete Control team had all left their pit and we’d wrapped for the evening the gift wrapped box made its way to a prominent position in our pit.

Tuesday came around and while we continued with our weapon testing and tuning we couldn’t help but notice frequent glances at the gift wrapped package in our pit. Eventually we got to the point where we had to pick which weapon we were taking to the box. With that, we loaded up along side Complete Control and made our way toward the arena, box in hand. Our initial plan was to load in with the box and pull it at the last moment, handing it to Derek as we assumed based on last years “situation” that loading into the arena with a mystery box would not be well received. We were then told that, so long as there was absolutely nothing in the box we would be able to leave it on for the fight. I don’t recall the exact words, but the general impression was that if we had hidden a net in there we’d be in a world of trouble. With that, the box was thoroughly inspected, the combined bot weight was checked, and we prepared to roll into the arena as the final fight on Tuesday. Quite suddenly there was a hissing noise and an unexpected smell. Complete Control had just hooked up their flame system but something was clearly not right as propane was venting all over the place. Complete Control was pushed outside to let it finish venting somewhere less enclosed and due to the amount of flammable gas in the air the fight was postponed until Wednesday morning. We briefly contemplated swapping weapons again but decided against it as we’d had our fun.

The qualifying rounds are a bit odd. With two ways to make it to the next round it gives the opportunity to gamble a bit on strategy, which is exactly what we did. With four weapons to choose from and three being reasonably suitable to fight Complete Control we had plenty of options.

2: The Lifter with Short Fuse

3: The Axe with Short Fuse

We also had the overall tournament structure to consider. There were a lot of nasty spinning weapons in the bracket this year, so in the fight with Complete Control we wanted to position the loser for the wildcard, as that would potentially mean one less vicious spinning weapon in play. With all of that in mind, I thought back to a small scale version of essentially the same fight and what I still consider to be one of the most exciting fights I’ve had, Nyx Vs. Uberclocker at Motorama in 2015. ( https://www.youtube.com/watch?v=pKcxtoiEbRg )

What you may notice in that fight is that Uberclocker does not, in fact, have a propane flamethrower.

Still, the axe seemed like a good choice to meet our goals.

It didn’t hurt that the axe also allowed us to run Short Fuse and it seemed like a waste to build the thing and not use it. 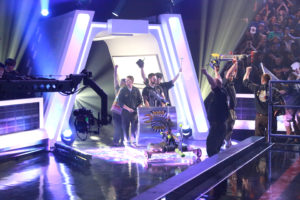 If it wasn’t obvious by the title of this part, I’ll be discussing the results of the fight starting on the next line. If you haven’t seen it yet and don’t want spoilers now would be a good time to stop reading.

The match didn’t quite go as we had hoped, but overall I think it was a pretty entertaining fight. We put a few holes in Complete Control, Short Fuse didn’t explode, and when it all was over Bombshell was still in great shape. In total the damage consisted of two melted PWM wires, a charred receiver, and some slightly melted wheels. The repairs took about 15 minutes once we were back in our pit. The smoke and “oil” you saw in the fight were from the urethane axe bumper on the front of Bombshell which started dripping and overall made a terrible, goopy mess all over the top of Complete Control. The axe did manage to get in a couple of good shots and put a few holes in their armor, but even with two shots into the center cavity on Complete Control we didn’t find anything quite vital enough to tip the fight in our favor.

That leaves one question: Did we do enough to get a wildcard slot? I can’t tell you yet, so you’ll just have to tune in next week to find out.